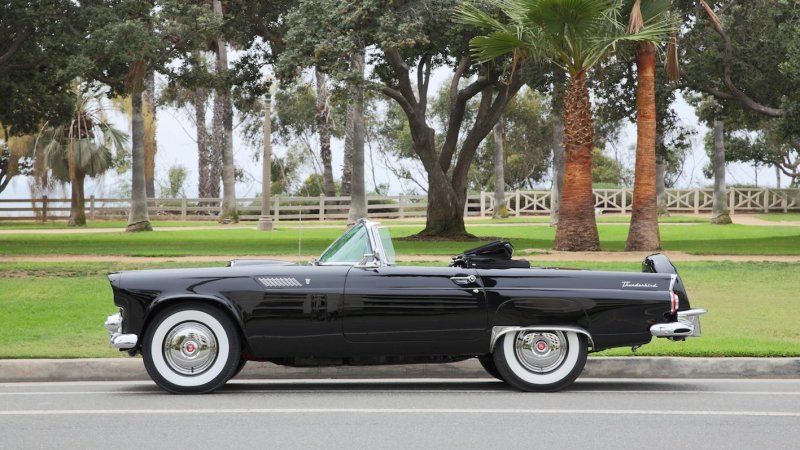 An icon that belonged to an icon. This little piece of cinematic history will be going home with someone (maybe you?) come November 17, 2018. The 1956, Raven Black Ford Thunderbird that once belonged to screen legend Marilyn Monroe is set to go to auction later this year.

Juliens in Los Angeles will auction the two-seater convertible roadster that Monroe bought in 1955 and drove until 1962. It is said that the little rag top carried her and Arthur Miller to their June 28, 1956, civil wedding ceremony and then two days later to their private wedding. Now it is hitting the auction block and is expected to fetch somewhere in the neighborhood of $300,000 to $500,000.

The car is raven black with black and white interior and has a detachable hard top as well as a canvas convertible top. The 1955 Thunderbird was Ford’s response to Chevrolet’s 1953 Corvette. It debuted late in 1954 and marketed as a personal luxury car. Consumers went crazy for it and demand far exceeded Ford’s expectations.

Monroe’s model had a 312 cubic inch V8 that kicked out 225 horsepower, along with the Ford-O-Matic three-speed automatic transmission. The little car was completely tricked out with power window, brakes, seats, and steering. It also included the Continental kit which had several key features, including the spare tire mounted on the rear bumper.

Monroe gave her beloved T-Bird to the son of Lee Strasberg (her acting coach) for his 18th birthday in 1962. The legal transfer took place, according to several sources, just months before her tragic death on August 5, 1962.

The current owner is unnamed but does claim to have the necessary documents that prove the authenticity of the car. This includes documentation from Connecticut as well as a letter that an insurance company sent to Monroe regarding the car. The car has been completely restored to its original appearance and the engine has been rebuilt.

Marilyn would be proud.

Whether you are purchasing an iconic collector car or a rare classic, Woodside credit can help you bring it home. Our easy terms and low payments mean that it is easier than ever to own that one in a million car you can’t get out of your head. Apply today for collector car financing and bring that beauty home.