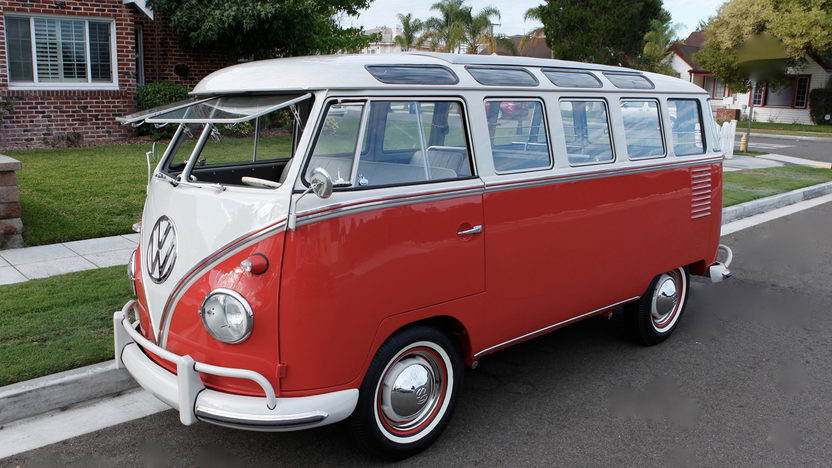 Every car enthusiast worth his (or her) salt knows that Monterey Car Week & Concours d’Elegance is one of the most prestigious car shows in the world. The 2017 Pebble Beach Concours d’Elegance and Monterey Car Week run from August 11 through August 20. During that time, the best of the best, a scant 200, of the finest collector cars will grace the Pebble Beach Golf Links’ 18th fairway. Even fewer will receive the elite status of being formally recognized for their historical accuracy, technical quality, and excellence of style. Among them is an incredible “woods find,” a 1959 23-window Volkswagen Samba.

The Story of the Samba

The microbus was Volkswagen’s informal name for the Volkswagen Type 2 (with a split windshield). It was also called the Splittie or Splitscreen. Production began in March 1950 for the first generation of this iconic vehicle and the first Samba rolled off the production line in 1951.

The informal classification for these vans was done by the number of windows they had. The first one had 23 windows, including front, sides, even the roof has eight panoramic windows. That dropped to 21 windows in 1964 – still impressive. In an effort to give it a distinction from the regular Volkswagen van, it was given the moniker Samba. Unlike most vans, the Samba didn’t have a sliding side door, but instead had dual pivot doors. It also had a fabric sunroof. The roof extended just a little beyond the length of the vehicle to provide a shade for the driver.

A Real Rags to Riches Story

This 1959 van is expected to take the Samba record for highest sale price. There are several factors that figure into this. One, it has the romance of being that one in a million “barn find” – or in this case, an Oregon “woods find.” Two, it is nearly perfect after its extensive restoration. In fact, it is so close to Volkswagen Samba perfection, it will come with a Volkswagen Certificate of Authenticity as well as 400 photos that document its incredible journey from being an abandoned little van in the woods, to an exceptional showpiece that won the 2017 Kelley Park Vintage Volkswagen Show’s Best Luxury Bus Award.

Now the Little Samba is slated to be a shining star at one of the world’s most prestigious automotive events. With the current record for a 23-window Samba holding at $291,500, it should be an interesting ride.

Did you find that once in a lifetime barn find? Or maybe you’ve spotted a sweet classic to add to your collection. Whatever the case, Woodside Credit can help you put it in your garage. Our easy terms and professional service will put you in the driver’s seat in no time. Give us a call or go to our website and complete a Quick Quote. Don’t let that one in a million car pass you by!